What to do and visit in Castelo de Paiva

Castelo de paiva is a town with a strong connection with Nature where one can wander through mountains and rivers and where old villages keep their secrets and crafts. Due to its location and natural wealth, different people have settled here, since the Paleolithic period, as shown by the numerous Megalithic or Roman monuments that are still standing. The landscape camouflages a strong heritage of structural memories from mineral extraction and displays, with splendor, endless rows of vines. The gastronomy and the wine mark the festive calendar and invite you to visit, especially in the summer, when the various river beaches and high mountain ranges vibrate with activity.

What to do and visit in Castelo de Paiva:
(ordered by the proximity to Cimo da Vinha)

All year (Spring is better for colorful pictures)

From the various mountain ranges with memorable views, you will be able to easily reach the following peaks: A) Hill of Saint Adrião: right next to Cimo da Vinha this mountaintop gives you a breathtaking view over the Paiva Valley, even extending to Oporto. At the top there is an old chapel, used annually for a procession of remote origins. B) Hill of Saint Gens: of the three, the only one that does not have a chapel but for its endless view, it deserves a visit, also to check the famous swing that faces the Douro. C) Hill of Saint Domingos: on the top of St. Domingos hill there is a breathtaking panoramic view, including the curves of the Douro. From the secular procession – which took the figure of the saint to Nossa Senhora das Amoras, in times of drought – there are already reports from 1758, in Congregation Memories. In São Domingos you can also contemplate the beautiful gardens and the amphitheater on the hillside.

From the various places of historical interest built and discovered in Castelo de Paiva, we highlight the following, which you will be able to easily visit: A) Parish Church of Real: built in 1737 it has beautiful paintings and a unique Baroque splendor. In the churchyard you can see six sculptures of the apostles, in stone, as well as the medieval mark on a stone with the measure of what would have to be offered to the priest by the devotees, for the slaughter of the pig. B) Ancient Grave of Boavista: Considered as one of the most unique from Medieval times, in Portugal, because it displays a typology different from that of the other funerary monuments, since it is the only one that does not have an arch. It contains several inscriptions engraved such as crosses and swords. C) Serrada Portal: With a Mannerist style, this span portal from the old Manor of Bulhões de Santa Cruz das Serradas em Paiva, from the 16th century, it has a square shield. D) Pit of the Moorish: Two rectangular graves carved in a granite block, dating from the period between the 9th and 11th centuries. E) Catapeixe Viewpoint: Stone balcony on the side of the N224 road from where you can contemplate the Douro and Paiva rivers, as well as the island of Castelo. F) Raiva Pillory: Monument from the 16th century that marks the independence of the honor of Raiva in relation to the municipality of Castelo de Paiva, a situation in which it remained until the first decades of the 19th century. G) Monument to the Miner: Next to the disabled mining complex in Germunde, this bronze statue depicts the miners with all their work clothes.

Already distinguished as one of the clearest rivers in Europe, the Paiva river meanders through cliffs and hills oscillating between brave paths that challenge rafting and canoing enthusiasts and forgotten forest beaches, with sand and shade, where immersion in nature is total and the waters are warm. Visit the village of Várzea and go through two ethereal trails:1) downstream you will go through the forest and abandoned houses reaching the wild beach of Retorta. 2) If you go upstream, you will start climbing the cliffs and discover the ancient Mill Bridge of Melo, the old connection of millers and travelers, between Castelo de Paiva and Cinfães.

The Wine Fair is the annual festivity that brings the most number of visitors to the town of Castelo e Paiva. On the first weekend of July, the historic town center turns into an electric torrent of people who for four days, glass in hand, taste the Wines of the best local producers to the sound of street folk groups and concerts. The best delicacies and crafts are also represented in several shop throughout the precinct.

Click here to read our detailed article about the Fair.

In the historic center of Castelo de Paiva, in the old jail building (from the 18th century), there’s now an Interactive Tourism Store and the House of Payva where you can consult and see countless works and objects from the county’s history, as well as sample the best regional products. On the top floor there is also the CICL (Local Culture Interpretation Center), an eclectic space with a varied cultural program. Cross the square to visit the renovated Pinheiro Estate, a green park right in the heart of the village where the prestigious Music Academy of Castelo de Paiva is installed, in an elegant and charming old building.

All year (milder weather in Spring and Autumn)

It is a project to get to know the interior of Castelo de Paiva and its natural beauties in a profound way, by cycling along unusual trails that lead to genuine villages and places. “Green Trails BTT allow you to get to know this region in a different way: strolling through the narrow street villages, where beautiful and profusely ornamented churches stand and pass by houses with neat coats of arms and beautiful balconies, almost always flowered”. There are two trails: A) Trail of the Vines: with 12 km of length, it privileges the vineyards and the forest areas, contemplating the valley of the Sardoura river, in an idyllic contact with nature, enhancing the proximity with the rural world. B) Miner Trail: 31 km long, this route cuts through the Pejão mining region along the old paths that the miners used to walk to work, also passing through some of the itineraries of the old railway locomotives, which brought the coal from the mines to the Douro River.

Organized by ADEP (Association for the Study and Defense of the Historical and Cultural Heritage of Castelo de Paiva), this annual fair (usually on the second Sunday in October) takes place at the end of the harvest season in the beautiful Linden Trees Park. This “old fashion” fair aims to recreate a past time through the crafts that were part of the rural experience two centuries ago. Folklore, gastronomy, crafts and traditional games are the basis of the activities and you can already taste the “young” wine from the recent harvests and purchase the products of the Spring / Summer cultures.

Island of Loves and Castelo beach

All year (Summer is more inviting to dives)

Located at the mouth of Paiva river and shrouded in legends of tunnels and nobles, the Island of Loves is one of the nature ex libris of the region. A small desert island in the middle of Douro where the isolation made the native vegetation remain almost intact with imposing and old pines, oaks, olive trees, ash, alders, reeds and tamarisks. Visit it by kayak and boat or contemplate it from the Castelo beach and dock where you can also relax on the beach or on the terrace.

Two of the most beautiful and oldest villages on the Douro riverside, in Castelo de Paiva. A) Gondarém has a more rustic display, in the middle of the woods, where old schist houses and fields that accompany the forest, parade along the river bank. Right by its side, B) Midões has a breathtaking view with immense “hanged vineyard” and a bucolic dock in the Douro with several old houses and properties, that go up the village.

Next to the Entre-os-Rios bridge in Sardoura, this recently revitalized pier has an almost infinite view of the Douro and Tâmega rivers. Right next to it you can also visit the gold-plated bronze Angel. A 12 meters high statue which was created in honor of the victims of the fall of the Hintze Ribeiro bridge. Also to the side, get to know the mouth of the Sardoura river, where the local board with the support of volunteers created an access to the small beach of Gramão Park. Finally, enjoy and cross to the other side of the Douro and visit the historic area of ​​Entre-os-Rios, already in Penafiel, and delight yourself with the famous local restaurants.

All year (Summer is more inviting to dives)

At the mouth of the Arda river, in the shade of imposing poplar trees, the vast beach invites you to sunbathe and take a dip in the Douro. A fresh and inviting leisure area, in harmony with nature, it is also known for having traditional restaurants serving delicacies all day long with a view of the Arda river and of the old 1893 locomotive bridge from the Pejão coal mines. Recently, with the construction of the trail Living the Douro, the location was equipped with a new bar / terrace just above the river. For a stunning photo of the Douro, explore the surroundings and make a shot from the top of the hill of S. Domingos or the church of Raiva.

The ancient Burial of Carnival at Pedorido

From old popular roots and immune to imported Carnival festivities, Pedorido continues to do the Entrudo parade with the “defunct” – with the participants grotesquely masked with improvised props, especially from rural life – with the coffin burning, which on fire descends the secular bridge of the mines’ locomotives and disappears through the current of the Arda River, while the masked ones howl and cry. At the end, there is a reading of the will where the local events of that year are satirically criticized, following the revelry. A genuinely archaic and magical experience.

In an area of ​​excellence in the Demarcated Region of Verde Wines, you don’t need to wait for the popular Wine Fair to taste the famous local Verde Wines, since the main producers are represented in the restaurants and shops of Castelo de Paiva (also at Cimo da Vinha, you can taste some). The gastronomy is varied and rich but we highlight the young goat and lamb – roasted-, with oven rice, the farmer’s boiling dish with the excellent local olive oil, the smokehouse sausages and the famous seasonal dishes such as steaks with onion typical of the Saint Eufémia romary (stating on September, the 14th) or the lamprey and the shad, now with an annual festival on the second weekend of March in the Boure Dock, on the Douro riverside. Other river fishes such as the boga, trout, mullet or eel are being reintroduced into the regional menu, namely through the gastronomic festival Arda D’Ouro, in the first weekend of September. To finalize, the pão-de-ló is a mandatory cake, just like the rabanadas with our regional honey and the traditional sopa-seca.

All year (under appointment)

A project developed by the City Council and ADRIMAG, to document the work produced by still active artisans, in our town, who perpetuate the traditional crafts. Through an App (Android | IOS) – and under appointment – it is possible to follow the work and visit the workshops of masters of copper, basketry, weaving, grinding as well as various artisans (artisanal fishing nets, shoemaker, blacksmith and barbers, among others).

What to do and visit in Castelo de Paiva 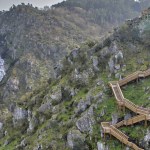 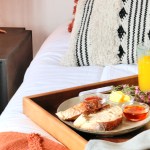